I recently finished reading Naked Heat by Richard Castle. It’s book two in the Nikki Heat series from ABC’s TV show Castle. This book was just as good as the first and I need to find myself a copy of book 3. I’m pretty sure there’s four books out so far in the series and no mention yet if Richard Castle is going to write a fifth book. You can read my review of it here. I also finished reading The Fault in Our Stars by vlog brother John Green. It’s the second book I’ve read from him and it was mind blowing. I can’t really express into words how much this book touched me. You can read my review of it here.

I’m currently reading (still) George R. R. Martin’s A Clash of Kings . I can’t seem to find the time where I can just read this book alone and not pick up other books for book clubs or reviews. I really want to finish this and book three before the next season of Game of Thrones returns but it’s starting to look less and less likely. I’m also still reading  Miss Peregrine’s Home for Peculiar Children by Ransom Riggs for Three Nerds and a Book Club’s February read. It’s finally starting to get interesting. It only took about 100 pages and the first four chapters >> I’m hoping to have it finished by this weekend.

Up next I plan to read Hiding Gladys by Lee Mims. A copy was given to me by JKS Communications for their March book tour. I read the first chapter and so far I like it, but I put it down to try and finish other books first. I also recently purchased Return to Ravnica: The Secretist Part One by Doug Beyer. It’s a short 67 page novella tie-in for the Magic the Gathering: Return to Ravnica book set. I bought it for my boyfriend to read but I’ll probably also give it a whirl. Part two comes out later this month too.

What are you reading this week?

Book Description: Nikki Heat and Jameson Rook are together again in Richard Castle’s thrilling follow-up to his “New York Times” bestseller, “Heat Wave.” When New York’s most vicious gossip columnist, Cassidy Towne, is found dead, Heat uncovers a gallery of high profile suspects, all with compelling motives for killing the most feared muckraker in Manhattan. Heat’s murder investigation is complicated by her surprise reunion with superstar magazine journalist Jameson Rook. In the wake of their recent breakup, Nikki would rather not deal with their raw emotional baggage. But the handsome, wise-cracking Pulitzer Prize-winning writer’s personal involvement in the case forces her to team up with Rook anyway. The residue of their unresolved romantic conflict and crackling sexual tension fills the air as Heat and Rook embark on a search for a killer among celebrities and mobsters, singers and hookers, pro athletes and shamed politicians. This new, explosive case brings on the heat in the glittery world of secrets, cover-ups, and scandals.

As with the first book, this next installment in the Nikki Heat series reads very much like a Castle episode. The relationship between the characters is so tangible and easy to relate to. The mystery in this book dragged a bit more than in the first book, but the action and plot twists kept me wanting more.

There were a good handful of moments that had me rolling around in my chair flailing because I was picturing Kate Beckett and Richard Castle.

What I love most about this book (and series, aside from the fact that I love the TV show Castle) is that it’s a quick and entertaining mystery read. It contains plot twists, dramatic scenes and a healthy dose of tantalizing romance. And of course plenty of cop humor. If you’re looking for a good and entertaining mystery to read on a gloomy or snowy day this series has the books for you. With these books it is so easy to fall into the captivating New York homicide scene that is dominated by Nikki Heat and the police in the 20th precinct.

Recently Finished: I recently finished these three really fast reads. The first is an anthology by Eva Lefoy, D. R. Larsson and Haley Whitehall called Tentacles: An Anthology. It was wonderfully creepy and full of tentacles (take that as you will). You can find my review for it here. The other two are books one and two of Cirque du Freak by Darren Shan. Even more creepy books. I seem to be going through a streak of horror recently. You can find my reviews for these eerie young adult books here and here.

Currently Reading: I am still working my way (ever so slowly it seems) through A Clash of Kings by George R. R. Martin. It’s book two of the A Song of Ice and Fire series and it’s still great. I’ve just started Miss Peregrine’s Home for Peculiar Children by Ransom Riggs for Three Nerds and a Book Club’s February read. It’s…. interesting to say the least. And I also started Naked Heat by Richard Castle which is book two in the Nikki Heat series. Although I’m only a few pages in I still love it because it reads just like a Castle episode. Somehow, I’ve gone back to reading more than a book at a time, but it seems that I’m in one of those moods where I can’t keep to a book for too long because I get bored, hence me reading three books at once. Hopefully I can do this… >>

Up Next: Upcoming potential reads are Hiding Gladys by Lee Mims which is a book provided to me by the publicist for the upcoming blog tour. My review for it will be up mid March. I also would like to read The Fault in Our Stars by John Green. Many of you probably know of this and have read it. It’s become a huge fad (at least through what I’ve seen on tumblr) and I’ve heard many wonderful things about it. I have only ever read Will Grayson, Will Grayson by John Green and David Levithan and loved it so I’m hoping that TFiOS will be just as great. I also just recently purchased the autographed box set of John Green’s books and am excited to read the rest of his published work. I also am hoping to read Benighted by Kit Whitfield which is the book I pulled for my February’s Random Read. So hopefully I can get that book started and not keep putting it back into the bookshelf. 🙂 Choosing the next book to read is always so hard because I just want to read them all!

Currently Reading: An ARC copy of Me Before You by Jojo Moyes. I am looving this book so much! Hopefully I’ll finish and have a review up tonight before I leave for Peru tomorrow 🙂

Recently Finished: Heat Wave by Richard Castle. Loved it and fangirled all over the place. Review of it can be found here.

Next Read: For the lovely online book club Three Nerds and a Book Club I will be reading The Hobbit by J.R.R. Tolkien. I’ve just barely started (3 pages) but this will be my travel read 🙂

What are you all reading for the holidays? 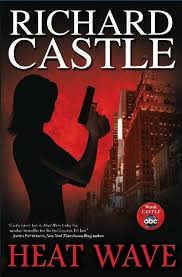 Book Description: A New York real estate tycoon plunges to his death on a Manhattan sidewalk. A trophy wife with a past survives a narrow escape from a brazen attack. Mobsters and moguls with no shortage of reasons to kill trot out their alibis. And then, in the suffocating grip of a record heat wave, comes another shocking murder and a sharp turn in a tense journey into the dirty little secrets of the wealthy. Secrets that prove to be fatal. Secrets that lay hidden in the dark until one NYPD detective shines a light.

Mystery sensation Richard Castle, blockbuster author of the wildly best-selling Derrick Storm novels, introduces his newest character, NYPD Homicide Detective Nikki Heat. Tough, sexy, professional, Nikki Heat carries a passion for justice as she leads one of New York City’s top homicide squads. She’s hit with an unexpected challenge when the commissioner assigns superstar magazine journalist Jameson Rook to ride along with her to research an article on New York’s Finest. PulitzerPrize-winning Rook is as much a handful as he is handsome. His wise-cracking and meddling aren’t her only problems. As she works to unravel the secrets of the murdered real estate tycoon, she must also confront the spark between them. The one called heat.

As a huge fan of the TV show Castle and of Nathan Fillion I was ecstatic to learn that the books mentioned in the show had actually been written under the name of Richard Castle. I picked it up with high expectations and was not let down. The book read very much like the show itself where we are first introduced to a homicide. Piece by piece Nikki Heat (Kate Beckett) unravels the mysteries behind this homicide and the following crimes that occur days after.

This book kept me wanting more as I followed Heat in her drive to solve the mystery. It had me gasping in shock, laughing at Heat’s sassiness and staring wide eyed as the murderer is finally revealed. Throughout the entire book I was fangirling at what Richard Castle had written. Especially when it’s assumed (and it’s a pretty fair assumption) that Nikki Heat is Kate Beckett and Jameson Rook is Richard Castle.

The only downside when reading was there were a fair few sentences that had simple grammatical errors. I usually don’t make note of this but it happened enough times to bother me. Aside from that the book was fantastic.

I highly recommend any Castle fans to read this book. I have book two on my shelf and I can’t wait to pick it up. And even if you aren’t a fan of Castle or haven’t seen it, this book is a good quick, fun and very heated mystery read. The TV show is also very good.