I recently finished Miss Peregrine’s Home for Peculiar Children by Ransom Riggs for Three Nerds and a Book Club‘s February read. I really enjoyed it and can’t wait for the release of book two. You can read my review here. I also recently finished High Witch by Mona Hanna (and by recently I mean an hour ago). It wasn’t what I expected and I’m actually quite disappointed. The cover is so beautiful but the book just fell so flat for me. My review can be found here. And I have FINALLY finished A Clash of Kings by George R. R. Martin. It is book two in A Song of Ice and Fire. It only took me about four months to finish >> but that’s because I kept putting it down to read shorter books. Read my rather short review of it here.

I’m currently reading From the Angry to the Sublime by Earl T. Roske. It is a collection of short ghost stories that I won through a LibraryThing member giveaway. So far it’s interesting, though my .mobi copy has a lot of format errors so I’m stuck reading it .pdf format

I’m hoping to have it read and my review up by tomorrow.

Up next I plan to read Staring into the Abyss by Richard Thomas. It was given to me by the publicist to review and since it’s rather short (and just a bunch of short stories) I plan to read and review it tomorrow. I also have The Sword of Truth by Brian D. Anderson (book one of The Godling Chronicles) up to read and review by mid march followed closely by Hiding Gladys by Lee Mims. Both were supplied by JKS Communications. And during that I hope to start reading A Storm of Swords by George R. R. Martin, book three in A Song of Ice and Fire. Isis and I are actually going to be doing a readalong of it together, that way we can actually accomplish reading it (and not putting it down for other books) and then fan-girling about it together without the risk of spoilers. I’m pretty excited about this 😀 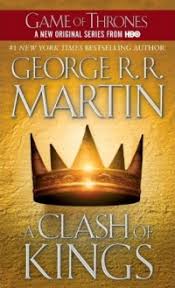 Book Description: In this eagerly awaited sequel to A Game of Thrones, George R. R. Martin has created a work of unsurpassed vision, power and imagination. A Clash of Kings transports us to a world of revelry and revenge, wizardry and warfare unlike any you have ever experienced.
A comet the color of blood and flame cuts across the sky. And from the ancient citadel of Dragonstone to the forbidden shores of Winterfell, chaos reigns. Six factions struggle for control of a divided land and the Iron Throne of the Seven Kingdoms, preparing to stake their claims through tempest, turmoil and war. It is a tale in which brother plots against brother and the dead rise to walk in the night. Here and princess masquerades as an orphan boy; a knight of the mind prepares a poison for a treacherous sorceress; and wild men descend from the Mountains of the Moon to ravage the countryside. Against a backdrop of incest and fratricide, alchemy and murder, victory may go to the men and women possessed of the coldest steel … and the coldest hearts. For when kings clash, the whole land trembles.

I picked up this book early November and I have finally finished it… four months later. The reason this took me so long to read (aside from the hundreds of pages of small and dense print) was that I kept picking up other books and reading them and putting this aside. Not because I didn’t like it but because in my mind those other books were shorter and if I finished those then I could go back to focusing on this. On and on again.

Despite taking me what felt like forever to read this book I still love it. It’s just as great as the first book. The writing style is breath taking and unparalleled in my opinion. The characters make you laugh, cry or scream out in rage and it is easy to find favorites in the boundless characters present. And while some chapters may start out dull, they almost always end on a cliffhanger where you’re left having to read another 60 or so pages before you continue with that plot line.

A Clash of Kings keeps you on your toes and wanting for more. While it is long, and sometimes I had to take a break from it, the book was amazing and I can’t wait to start on book three, and then four and five (and then wait impatiently for six and seven to be written/released). Even though I had seen the second season of HBO’s adaptation A Game of Thrones and knew what would happen, I was still gasping at times and speed reading to make sure my favorite character wasn’t going to die like Martin makes you believe. (I swear this man kills off everyone and I know one day my favorite will die and I just don’t want to read it).

If you haven’t already started this series and are a fan of fantasy/epic fantasy I say GO GET A COPY NOW AND READ IT. This series is amazing and my absolute favorite epic fantasy series so far. (I haven’t read LOTR but it was read to me as a child. So while I am also a huge fan of that I can’t say it’s my favorite if I haven’t read it yet).  These books are just amazing and each one seems to be even better than the first. Off to read book three!

Teaser Tuesdays is a weekly bookish meme, hosted by MizB of Should Be Reading. Anyone can play along! Just do the following:

• Grab your current read
• Open to a random page
• Share two (2) “teaser” sentences from somewhere on that page
• BE CAREFUL NOT TO INCLUDE SPOILERS! (make sure that what you share doesn’t give too much away! You don’t want to ruin the book for others!)
• Share the title & author, too, so that other TT participants can add the book to their TBR Lists if they like your teasers!

‘Gods be good,’ she gasped, ‘I’m starting to believe that Robert was the clever one.’

I recently finished reading Naked Heat by Richard Castle. It’s book two in the Nikki Heat series from ABC’s TV show Castle. This book was just as good as the first and I need to find myself a copy of book 3. I’m pretty sure there’s four books out so far in the series and no mention yet if Richard Castle is going to write a fifth book. You can read my review of it here. I also finished reading The Fault in Our Stars by vlog brother John Green. It’s the second book I’ve read from him and it was mind blowing. I can’t really express into words how much this book touched me. You can read my review of it here.

I’m currently reading (still) George R. R. Martin’s A Clash of Kings . I can’t seem to find the time where I can just read this book alone and not pick up other books for book clubs or reviews. I really want to finish this and book three before the next season of Game of Thrones returns but it’s starting to look less and less likely. I’m also still reading  Miss Peregrine’s Home for Peculiar Children by Ransom Riggs for Three Nerds and a Book Club’s February read. It’s finally starting to get interesting. It only took about 100 pages and the first four chapters >> I’m hoping to have it finished by this weekend.

Up next I plan to read Hiding Gladys by Lee Mims. A copy was given to me by JKS Communications for their March book tour. I read the first chapter and so far I like it, but I put it down to try and finish other books first. I also recently purchased Return to Ravnica: The Secretist Part One by Doug Beyer. It’s a short 67 page novella tie-in for the Magic the Gathering: Return to Ravnica book set. I bought it for my boyfriend to read but I’ll probably also give it a whirl. Part two comes out later this month too.

What are you reading this week?

Recently Finished: I recently finished these three really fast reads. The first is an anthology by Eva Lefoy, D. R. Larsson and Haley Whitehall called Tentacles: An Anthology. It was wonderfully creepy and full of tentacles (take that as you will). You can find my review for it here. The other two are books one and two of Cirque du Freak by Darren Shan. Even more creepy books. I seem to be going through a streak of horror recently. You can find my reviews for these eerie young adult books here and here.

Currently Reading: I am still working my way (ever so slowly it seems) through A Clash of Kings by George R. R. Martin. It’s book two of the A Song of Ice and Fire series and it’s still great. I’ve just started Miss Peregrine’s Home for Peculiar Children by Ransom Riggs for Three Nerds and a Book Club’s February read. It’s…. interesting to say the least. And I also started Naked Heat by Richard Castle which is book two in the Nikki Heat series. Although I’m only a few pages in I still love it because it reads just like a Castle episode. Somehow, I’ve gone back to reading more than a book at a time, but it seems that I’m in one of those moods where I can’t keep to a book for too long because I get bored, hence me reading three books at once. Hopefully I can do this… >>

Up Next: Upcoming potential reads are Hiding Gladys by Lee Mims which is a book provided to me by the publicist for the upcoming blog tour. My review for it will be up mid March. I also would like to read The Fault in Our Stars by John Green. Many of you probably know of this and have read it. It’s become a huge fad (at least through what I’ve seen on tumblr) and I’ve heard many wonderful things about it. I have only ever read Will Grayson, Will Grayson by John Green and David Levithan and loved it so I’m hoping that TFiOS will be just as great. I also just recently purchased the autographed box set of John Green’s books and am excited to read the rest of his published work. I also am hoping to read Benighted by Kit Whitfield which is the book I pulled for my February’s Random Read. So hopefully I can get that book started and not keep putting it back into the bookshelf. 🙂 Choosing the next book to read is always so hard because I just want to read them all!